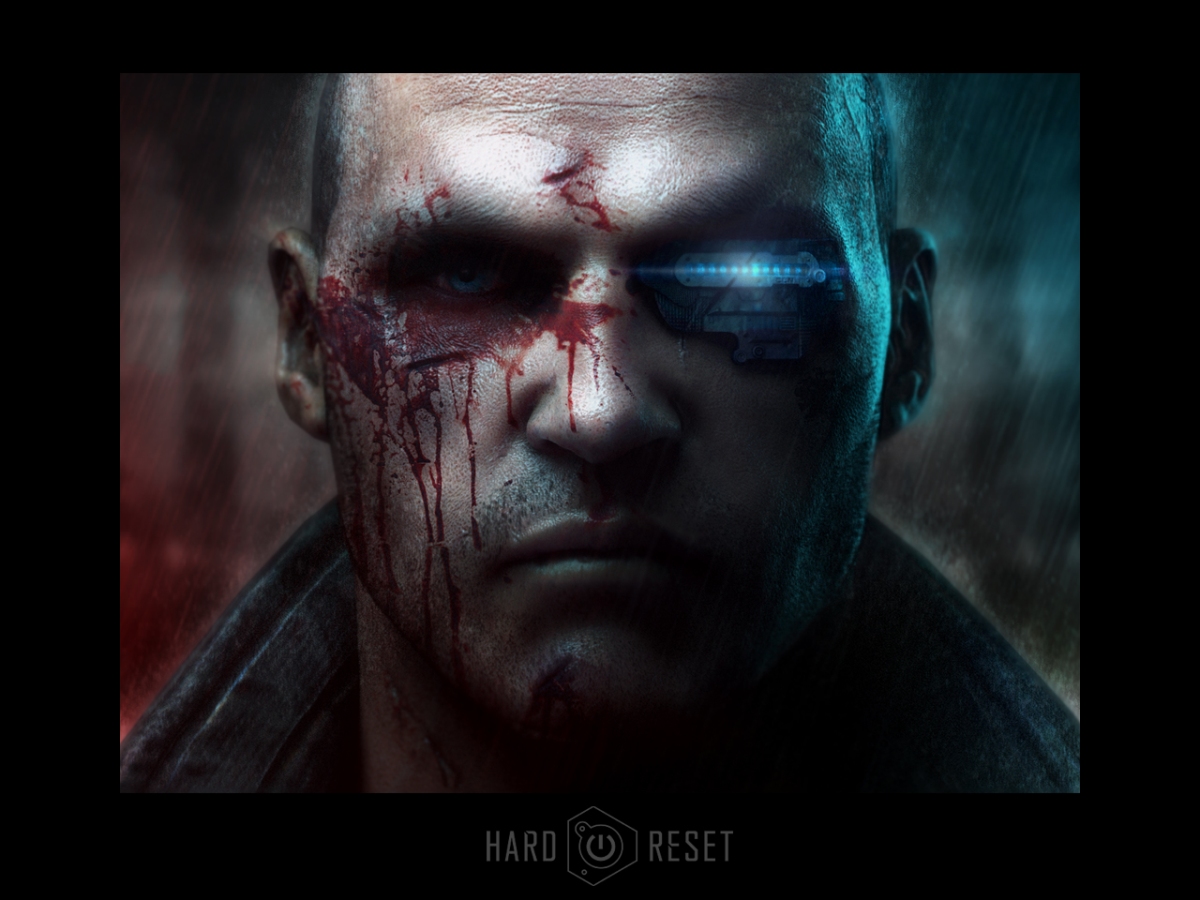 Hard Reset has leap-frogged over the decades worth of design that has evolved the modern FPS. Its about relentless, single-minded gunplay not about varied mixture of combat styles. Flying Wild Hog’s first game is a passion project from a developer made up of former employees of People Can Fly and CDProjekt Red.

The story is a Cyberpunk adventure where the human streets of New Bezoar are built with cold steel and product advertisements assault consumers from the walls and shine down from the sky. The world is beautiful; its vibrant with signs of the life that existed days before. There are fully realized plaza’s and run down apartments. Look out any window and you’ll see an impressive skybox filled with dead buildings. Routinely will you look out and be stricken by how well the entire thing was rendered.

True to its roots, there are no in-engine cutscenes as the story unfolds in motion graphic comics between levels that are heavily inspired by Ashley Woods’ work on his various Metal Gear Solid projects. They carry a story with some interesting ideas but often feels built of second-run cyberpunk themes; you’ll get government-sponsored paranoia and human augmentation and ‘the net’ but it’s pretty inconsequential in the long run and the end comes with little fanfare- more the end of a chapter than a story.

The models you’ll get are a handful of robot variations; from clusters of small, mouser types to gorilla framed chargers to skeletons grafted onto mechs shooting rockets that escaped from Final Doom. But that’s one of its biggest downfalls. With such straightforward gameplay, only having half a dozen normal enemies makes for excessive repetition. But that’s not quite right because every one of those regular enemies has a texture swapped revision with slightly different behaviors and armaments.

Even the boss battles, of which there are only a few, don’t offer much. The models are large and uniquely designed, their encounters amount to being trapped in an arena fighting swarms of normals until the boss exposes their glowing orange weak spots.

But its the weapons you use to the destroy those enemies that makes the combat so engaging. Two guns, one spewing bullets, the other energy-based, each with five firing types, provide an impressive array of options. But be aware, that’s all that’s offered- no melee, no dedicated grenades- two guns. While conceptually similar, both weapons and their variants have enough of a difference that all are incredibly fun to use. And they blow up the world well too, one littered with explosives and electronic devices that arc electricity when they short. Hard Reset’s combat is about enemy placement.

But combat can still be frustrating. And old-school difficult. This game requires circle strafing, a skill most people are either too young to have developed or haven’t had a chance to exercise recently, so most firefights will happen in close range, running inches from your opponents.

And killing them earns you what is essentially exp. As in experience. Points. This game has a leveling system. By gaining Nano, you’ll be able to buy new forms for your weapons and improvements for the existing. The system is remarkably robust and go a long way to push one of the games other terrific mechanics.

Exploration used to be a hallmark of FPS- a chance for the player to find hidden caches of ammo and armor to heal from the last battle and prep for the next- but became unnecessary as Halo introduced regenerating shields and did away with those kinds of pickups. In Hard Reset, containers of Nano are hidden throughout the world and offer an incentive to explore. Destructible walls, platforming puzzles, alternate paths- they all offer opportunities to further develop equipment that would merely be collectible items in the form of dog tags and hidden packages in other games. It’s a direct, in-game reward rather than empty content for the completionist. Its a nice return to form from genre defining games Doom and Marathon.

Completing a level assigns a score based on performance factors including number of deaths, secrets found and achievements unlocked. This post-game report makes sense with the skill-based combat and the arcady sensibility of the game as a whole.

While not perfect, Hard Reset can be a chance for Flying Wild Hog to further streamline many of the more tried-and-true mechanics that had made up the FPS genre for so many years.