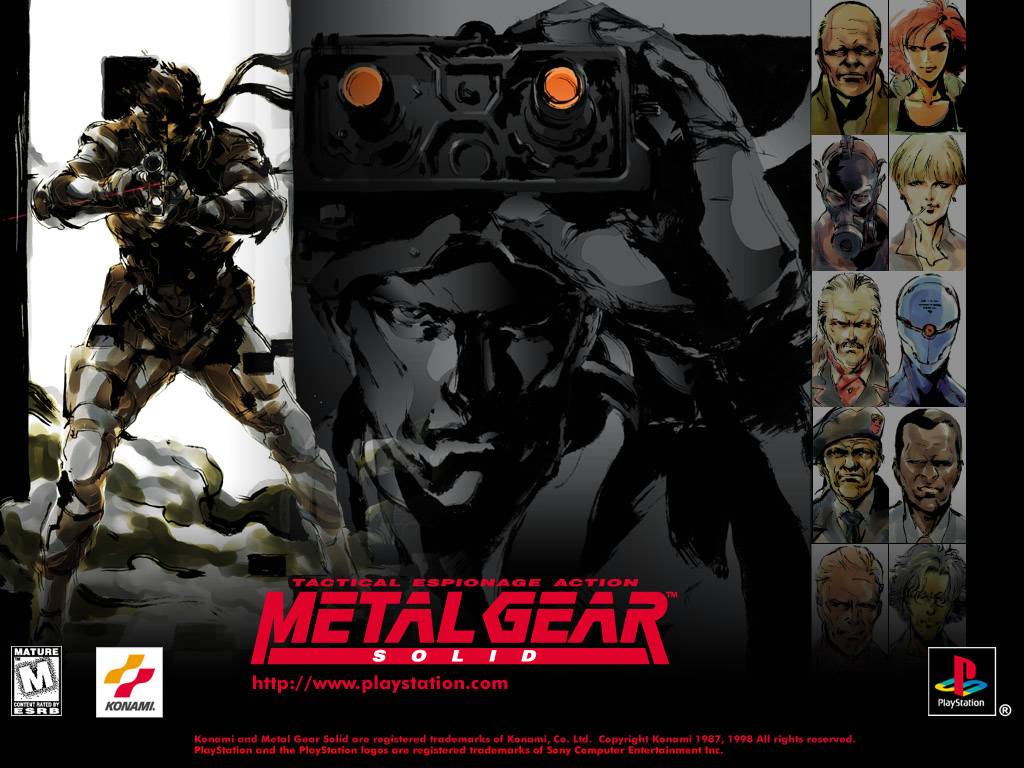 As an aesthetic work, the Metal Gear Solid saga examines what it means to be human. The spine of the series revolves around the full development of an individual’s identity through the foundations of their biological makeup, the shaping of culture and art upon them, and the importance of the experiences that individual collects throughout their life. But just as important are how those facets forms an individual’s beliefs and directs policies within their country and relative to countries across the globe.

Each game’s theme is divided into a handful of concepts that best represent it and turned into villains that its hero must literally defeat. Every member of FOX-HOUND, Dead Cell and the Cobra Unit are abstractions of parts of a larger system and the hero’s fight to defeat them is the moral of the story in which they appear. The true beauty of this series is that each game’s theme is fundamentally based on the themes explored by the entries that preceded it.

Solid Snake retired from FOX-HOUND after he saved the world. His last mission had been physically and mentally exhausting: he had destroyed Zanzibarland’s nuclear equipped Metal Gear D and killed its pilot, his friend Gray Fox, only to be confronted by a man thought dead: Big Boss. His former commanding officer reveals that he is Snake’s father as the two men are caught by explosions rocking the facility around them. After committing patricide and narrowly escaping destruction, Snake resigns himself to the snowy Alaskan countryside to live in seclusion.

His peace is short lived. On the nearby Shadow Moses Island, Terrorists have taken over a nuclear waste disposal facility. Colonel Roy Campbell, CO during Zanzibar, comes to Snake’s home and gives the soldier reason to take on a new mission: the terrorists are comprised of the Next Generation Special Forces led by new members of FOX-HOUND. Among them is its current leader, a man named Liquid Snake who shares more with Solid than just a codename. They have a nuclear missile and hostages, including Campbell’s niece Meryl and executives in DARPA and the weapons manufacturing company ArmsTech. The two men were collecting final data on a newly completed black ops project. Metal Gear Rex. They have a single demand: Big Boss’ remains. Snake heads back into danger.

Snake swims the subarctic Alaskan waters and reaches the disposal facility at its dock. What he sees is a battalion of men and Liquid, with identical features but British accent, riding the elevator up at the back. Naomi Hunter, FOX-HOUND’s chief medical officer is on the missions support team and through her, Snake learns of the Genome Army, soldiers genetically modified with genes that build great soldiers, raising their IQ’s and combat ability. All of these genes had been recognized in the twentieth century’s greatest soldier; the terrorists honor him by appointing themselves the Sons of Big Boss.

This idea is the origin point for the story’s thematic subtext. The Twin Snake’s central thesis is about genetics; it explains how genes define our physical appearance while questioning whether they dictate the quality of our life. The answer is found in both plot and gameplay. It is man’s fight against nature, against genetic determinism. Snake’s test is one of character. It starts here:

Each member of the new FOX-HOUND represents a different aspect of a larger biological system within nature. To help represent it, each one is a different organism that a collection of genes has found to be the most effective vehicle to survive; a mantis, an octopus, a wolf and an ocelot, a raven, and a snake. This is why all the characters use animal codenames.

Sniper Wolf shows the pair-bonding nature of animals in general and the pack-based social structure of Wolves in particular. She can survive in any terrain and supports her family by slowly and relentlessly stalking her prey.

Revolver Ocelot is the migratory flocking of animals. The ocelot can be found in various places all over the world, and, so, holds no allegiance to a single land, a character trait fitting of a man whose motives and loyalties only become more complex as the series continues.

Decoy Octopus is a master of disguise, a person who sheds all personality in order to inhabit the life he’s stolen. Biologically, he represents the mimicking nature of organisms who can take on the appearance and characteristics of other creatures to ward off predators and kill unsuspecting prey. Just as the process is faceless and unique to no one species in particular, the man himself has no distinct facial features or characteristics. The way in which he incorporates all the blood from the victim whose identity he’s stolen allows him to be any species, aligned with all and none.

Vulcan Raven is a metaphor for the circularity of biological life forms and the recycling of genetic material from one organism into another. The raven itself is a symbol of death and it would seem that the primary reason for its selection here is to show its inevitability. It’s no surprise, then, that Vulcan Raven’s birds consume him when he’s dying- he is a part of them as they will one day be a part of something else. Nothing goes to waste.

Psycho Mantis is an abstraction of the way that a brain functions. By taking control of the Genome Army, he is in essence issuing orders to many parts of a single ‘body.’ In the same way we use our eyes to see a fly, tell the hand on our left arm to move to a flyswatter, to pick it up, to raise it above our heads and swing it down, Mantis collects the information from a soldier in the second floor basement of Nuclear Storage Building A who has seen Snake (he is, in effect, more eyes), deliver orders back to that soldier to attack and sends out commands to other units in the area to rush in and give support without the need for that soldier to radio it in personally (it’s also a clever solution to the technical limitations of the PS1). This is precisely why there was unanimous support for the revolt and why FOX-HOUND begins to lose hold on the Genome Army after Mantis’ death.

As Snake defeats FOX-HOUND and rescues the hostages, each executive dies of a heart attack before the warrior’s eyes. It’s not long until he discovers that Naomi Hunter had infected him with FOXDIE, a virus intended to kill those behind Rex and its theft to keep the Metal Gear a secret. This is where we are offered a Darwinian outlet. The FOXDIE virus is programmed to destroy only those with certain genetic strains, letting the strong – those organisms without that strain – to continue and flourish in their stead. In very real terms, Snake is a vector, the source where a virus enters into a population and spreads from one host to the next.

The cyborg Ninja illustrates the incompatibility of genetics and bio-technology; he is a being whose organic material can die, even though its metal frame cannot. The man who was once Gray Fox has been transplanted into a cybernetic exoskeleton and is a mind desperately trying to find a place in the world.

At the far end of the mission is Liquid Snake – the man who calls Solid ‘brother’. Raised by Big Boss, Liquid became a member of Britain’s Special Air Service, and is a dark reflection to our steely hero. Atop Rex’s burnt-out wreckage, Liquid reveals the truth: Solid and Liquid are not actually Big Boss’ sons, but his genetic duplicates, each composed of one half of that legendary soldier’s complete genome. The Les Enfants Terrible project had tried to build the perfect warrior and Liquid had long believed that he had received the recessive waste material that resulted in the creation of Solid Snake. Liquids resentment towards his brother became an obsession to prove his own abilities – to his father, to his brother and to himself. It’s within the disparity of these twin snakes, now unrecognizably different, that the nature/nurture argument is most fully explored. They have become different because of their unique experiences and drives. This is where Kojima’s answer to the question of genetic determinism begins to form: genes are only the start of what a person can be, design a potential future.

This story is one of wills. Consider that The Twin Snakes is the only chapter in all of the Metal Gear Solid series with two potential endings. In Act 2, both Snake and Meryl have been captured. Snake has been strapped to a torture rack while Revolver Ocelot brutally interrogates him. There are only three options: submit, die and fight. Die and its game over, a fact Ocelot directly informs the player. Submit and the sadistic nut will have his fun on Meryl. Fight, by rapidly hitting the ‘Action’ button, and she may survive. It is the player-as-Snake’s struggle.

So as fist strikes bone and the Snakes last test commences, it’s no surprise that it’s Solid Snake who emerges victor. You had proven that he is the stronger of the two brothers. But as Snake escapes Metal Gear’s hangar, he finds that Liquid is beaten but not broken. Snake trapped and in Liquid’s crosshairs, something unlikely happens: Liquid Snake finally dies – of a heart attack. FOXDIE had taken another life, but perhaps not its last. As the virus is programmed to destroy specific genetic strains, if Liquid had its target genes, so could Solid. He leaves Shadow Moses – perhaps even with Meryl – and into an unknown future.

But over the course of this one mission, Snake had repeatedly beaten nature. His will overcame fate. That’s important for the story’s eleventh-hour reveal; it was Solid who was built of Big Boss’ weaker genes. It’s not Liquid’s physical inferiority but his blind obsession with it that deny him his victory over Solid Snake. In fact, he possessed the same determination and resilience that Solid does but chose to focus it on a different end – fight after fight, Liquid survives death because his life is dedicated to killing his brother; it has defined him and he has lost the perspective and strength of character to create his own path. Over the course of his life, Solid Snake had become a hero through his actions, ones based on his personal choices and the will to fulfill them. He is more than a copy of Big Boss.

While genes build our body and that influences how we perform in the world we are not bound to a defined fate. We can set off in our own directions, with our own hopes and dreams- it’s up to us to live our lives as we see fit. Solid Snake will die, without warning, but he will be different than when he was born. That is true of us all. 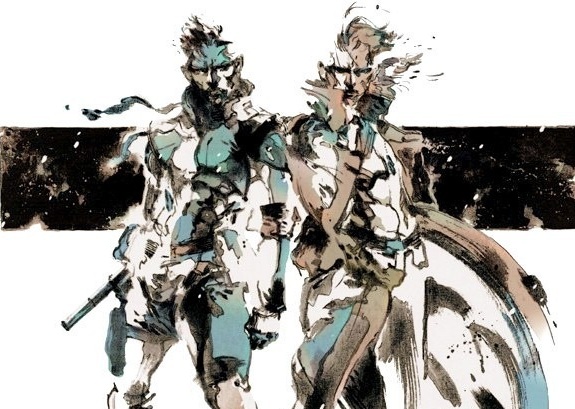