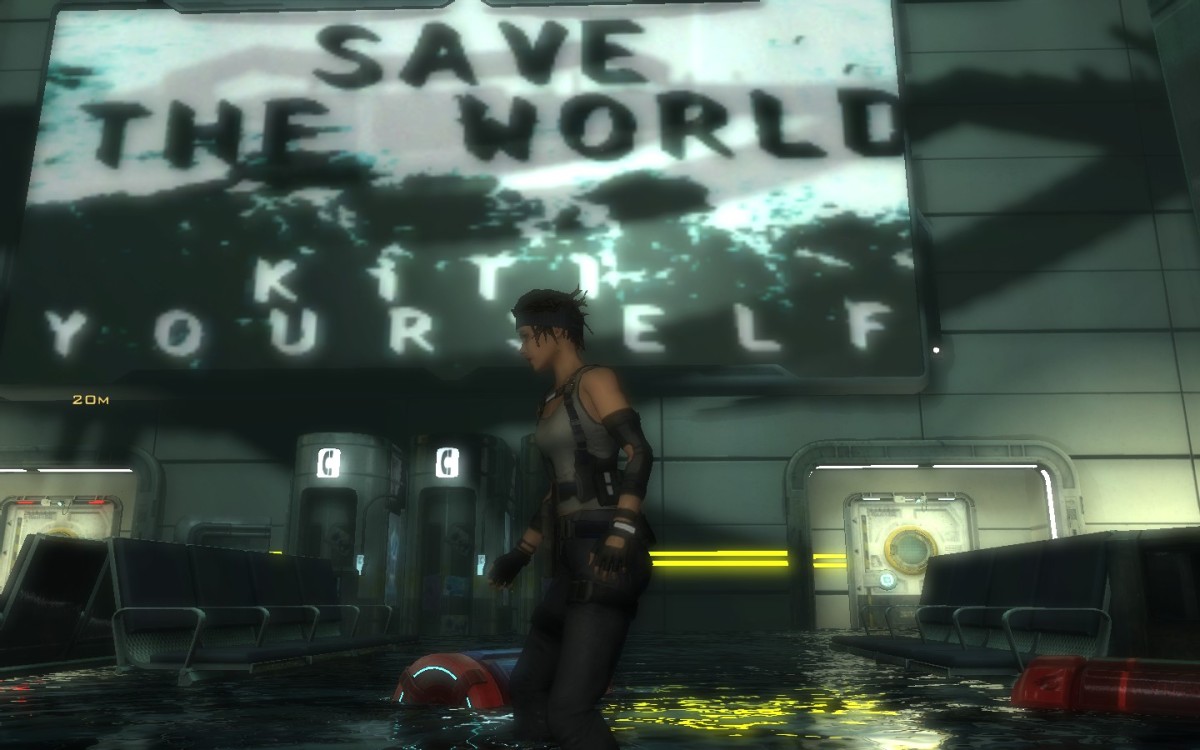 Hydrophobia: Prophecy is the third downloadable version of the original subtitle-free ‘Hydrophobia’ by Dark Energy Digital. Incorporating a water physics mechanic as a pillar of its design, the game finds Security Engineer Kate Olsen on The Queen of the World, a humanity saving cruise-ship colony as it’s besieged by the Malthusian’s, a terrorist group set on saving the Earth from overpopulation through the mass genocide of its citizens.  With gameplay heavily inspired by Naughty Dog’s Uncharted franchise, Kate climbs, swims and shoots her way to save the ship and humanity.

From the moment the Malthusian’s attack the Queen of the World, the ship is imploding around you.  Under the ever-watchful eye of the always-annoying Scoot, Kate is forced to navigate the dangers with environmental platforming.  While these scenes are never too complex nor does any one last very long, slow, stilted animation and a jump button that’s not as responsive as it should be lead to a few too many deaths and boring overall action.

Much of the layout of the Queen of the World can be disorienting, so the designers have implemented a basic navigational waypoint system that gives you a step-by-step instruction on how to reach that next objective in a long list of objectives that are either vague, seem irrelevant to the plot or add to your log under strangely editorialized notes. To help her access new parts of the ship, Kate is equipped with her MAVI utility display.  Functioning similar to detective vision in the Batman: Arkham games, the display reveals hidden information throughout the world.  The problem is one of variety: the MAVI hacks computers, CCTV systems and analyzes hidden ciphers that have been cleverly spray painted throughout the environment for anyone holding a MAVI but all are analogs for keycards and all do essentially the exact same thing- open a door to get to the next area.  It’s the illusion of options rather than the reality of them.  Even the CCTV, which is interesting in theory as it can be used to toggle between security camera’s within the vicinity only amounts to finding which camera is looking at the thing you need to activate and doing so.

The options, the ones that make a real impact on the gameplay, are given to eliminate the rooms full of enemies beyond those locked doors but even those are middling at best.   Primarily a behind the back and cover-based shooter, the combat of Hydrophobia: Prophecy has been built to take advantage of the physics systems of the engine but mostly boils down to shoot the red object whose only purpose is to explode with one of the multiple types of ammo.  Occasionally, you’re given the opportunity to sweep enemies up in a torrent of water or electrify the puddle they’re already standing in, but clunky hit detection that isn’t rectified by the incredibly generous aim-assist keep these encounters from being interesting.

There is also the ability to stealth, a mechanic I discovered only after a prompt popped to indicate I could execute a stealth takedown on an enemy I’m pretty sure was already incredibly dead.  But it was a prompt I was happy to follow and was awarded points for it. Also, points.  Kills, finding collectibles and shooting barrels and hazards (even if only for fun) and earning medals, the ingame achievement system, nets you points that add to a larger score that only matters for leaderboards.

Easily the most impressive part of Hydrophobia is the water physics.  While flowing current has weight and force behind it, Kate’s clunky animation does little to make you feel like she is struggling against it beside the noticeable drop in the speed of her movements as she cuts through it. Unfortunately, that’s true about all animations.  Her jumps are stilted, her shimmies too sharp yet somehow too slow.  This is especially true of the animation of the Malthusians, who have little transition from shooting out of cover and hiding back behind it.

But those animate character models that range from generic to ugly.  The Malthusians are basically the model of any pedestrian found in any modern day open world game with cloth skull masks wrapped around their head, Scoot is plain looking and forgettable and Kate, who has the most work and polygons by virtue of her being the game’s star, has terrible design that seems out of place with her character. The Queen of the world is populated with mostly dull, repeating items and textures and with all the exploding barrels, electrical conduits and collapsible walls would probably have killed all its residents for the Malthusians anyway.

The philosophies that the Queen of the World and the Malthusians represent are both interesting enough individually that the idea of them entangled in a war could be compelling, but poor storytelling and script coupled with annoyingly written characters that spew infuriating chatter with bad acting throw away whatever potential it promised.  Dialogue lines that include ‘Civil disobedience feels great, doesn’t it Kate?’ and ‘I have two balls and none of them are crystal’ make staying with the game harder, not easier. Overall progression is hindered by simple AI.  While enemies are capable of taking cover and popping out to shoot, they regularly die by running through the fire of a barrel that had exploded long before they got there.  You’ll often take clips to the face before you find the location of your attacker but that might also be because there were times I saw myself get shot through a wall.

And the moments that should be exciting fall victim to the games collection addiction. That’s mainly because the events that are transpiring around Kate lack the drama or intensity to keep the player from getting distracted to search nearby rooms for documents and item’s strewn throughout the adventure. The progression really is little more than do X to activate Y to receive Z.  No matter how much time you stare at a wall, or sit in a room, that cipher won’t be activated, that dead body with passcode won’t appear, until after you have done exactly what the game wants you to do.

All of that is tantamount to an admission that I take very seriously:  I never finished it.  Two separate times, in two different places near the end of Act 2, places my research tells me aren’t particularly far from the end credits, I was hit with scripting issues where the game didn’t spawn the item or cipher I needed to progress, and was flat out locked in a room for one of them.  And then the auto-save, the only way to save data, logged.  The only recourse was to restart from the beginning of the Act, something every word I’ve written above should indicate I just couldn’t do three times, especially with the possibility it would happen again.  But this could happen to any user, so is worth talking about, because they might have spent the $7.99 for it.

It’s very important to understand what Hydrophobia: Prophecy is; literally, the third version of the same game with major technical and creative modifications made based on user feedback.  With this iteration of Hydrophobia being riddled with issues, I have to wonder about the quality of the initial release and am curious about whether or not Dark Energy Digital will continue to modify it in the future.  A curiosity made exponentially larger considering the conspicuous ‘Dev Feedback’ option found in the menu that, while full of points, isn’t deep enough to enter any specifics into.  And I tried!  Because with what’s currently here, I have doubts it will ever approach being even mediocre or that it even deserves the effort.