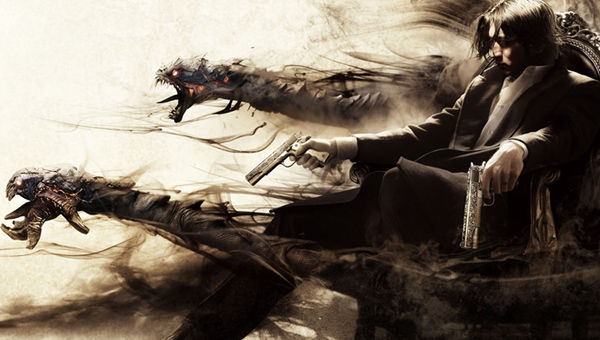 After he viciously slaughtered his way through the mafia family run by his Uncle Paulie, Jackie Estacado had vowed to never again use The Darkness.  The demon had given him great strength, but had manipulated and twisted the young man.  When we meet him again as he walks into a family run restaurant at the beginning of the Darkness 2, we see that he has prospered, the family is strong, its members loyal- and then they are attacked by an unknown group who want The Darkness for themselves.  The scene acts as a well-designed introduction to the world and mechanics- Jackie’s leg is destroyed and he’s pulled to safety, nothing but a pistol to fend off his attackers.  Where once he was an invincible god, he’s broken and dying, now just a man.  It’s been two years since he’s given in to the Darkness.

But it’s been longer for us.  When The Darkness was released in 2007, it was an anomaly.  Starbreeze Studios game based on the Top Cow comic married standard first-person mechanics to special powers that enabled Jackie to control demonic tentacles and Darkling companions.  They were complex and required a certain amount of strategy because they became useless when exposed to light.  By scaling the gameplay down to guns, tentacle powers and a single AI controlled Darkling, the sequel Digital Extremes has built plays much better but the narrative sequences, though all well implemented with some genuinely great moments, don’t feel as fresh as the originals, don’t push the technique further.  But that would have been extremely difficult.

The scenes from the original Darkness were incredible and many revolved around Jackie’s relationship with life-long sweetheart Jenny.  The tenderness of the famous first-person kiss, the intimacy of snuggling up on the couch to watch To Kill A Mockingbird- in its entirety!- and the gut wrenching horror of her execution while the Darkness forces you to watch are scenes you won’t find anywhere else.  What Jackie lost had given him good reason to banish the demon.

But as the Darkness scratches at the back of Jackie’s mind and Mike Patton’s cracked, modulated voice seduces him with the promise of life, we’re glad when he accepts.  That crucial flip is well crafted; Jackie becomes unstoppable where he was broken, a monster towering over his attackers.  It’s also great characterization; you understand why he’s Don of this mafia family and why he’s afraid of the beast he became at the end of the last game as the iconic tentacles slither into view.  They make him powerful.

And allow you to tear through enemies.  As long as you stay out of the light, you have full access to all the abilities the Darkness provides.  Each tentacle is mapped to a trigger- the right one swipes vertically or horizontally as the right thumbstick is moved while the left trigger grabs.  These basic moves are incredibly useful and versatile; the slash destroys obstacles and beats down attackers while the grab can rip out objects to use as make-shift cover or projectile.  The throw has a generous auto-aim that keeps the combat visceral and fast without feeling cheap and the grab enables gruesome, violent executions that decapitate and tear enemies in half.  These melee grapples are terrific companions to the solid gunplay.  With room for three weapons and dual-wielding, the Darkness allows Jackie to jump into groups of enemies and lay waste; in conjunction, these mechanics are a perfect hybrid of old-school first-person carnage and precise shooting controls.

Every kill is worth Dark Essence, experience points that can enhance the Darkness’ abilities.  While every kill gains Essence, moves can be combined with your Darkling companion or from collecting the twenty nine relics hidden throughout the game.  The leveling system is surprisingly deep- divided into four branches, each focusing on expanding the various combat mechanics including ammo capacity and damage, increased regeneration and pickups and new executions.  These upgrades smartly add new abilities to the combat without making you feel weak at the beginning.  At the end of the game, Jackie is incredibly proficient at destroying the world.

Which is fine- this is a tale of vengeance.  But when Jackie begins to see Jenny everywhere he goes, reliving their past, he begins to question his grasp on reality and we’re forced to wonder how much we actually understand his place within it.  While the narrative alternates between unrelenting action and somber reflection, this is a very linear game; and that mostly works- it’s well paced and builds large events until its finale and doesn’t last long enough to grow stale.

To further fill out the content, Digital Extremes has included the Vendettas campaign.  A companion piece to the main story, ‘Vendettas’ throw players into one of four Darkness-wielding characters who are hired by Jackie’s right-hand-man Vinnie directly after the openings assault on the restaurant and show you some of the events that Jackie didn’t witness himself.  Each character has their own melee attacks and backstory; Inugami and his katana the Kusanagi, Shoshanna and her double-barreled Arm of the Night, the mystic shaman JP Drummond and the axe-throwing Jimmy Wilson.  While they all play fundamentally the same, these characters special weapons and unique talents build them out to be quite different while all balanced to help each other out.  The mode can be played solo, but it’s highly recommended that you play online with others- each of the eight missions are designed for more players and having to kill all those enemies on your own can be a chore.  But try and play as each as your EXP doesn’t pool and you might get caught in a situation online where your preferred character will get chosen by someone else.

While it’s a perfectly serviceable first-person shooter, the additions of the Darkness abilities, ink streaks on thick paper cel-shaded graphical style and further implementation of narrative scenes make the Darkness 2 stand out from other titles that have been sucked into the creative black hole of modern military shooters. The sequel Digital Extremes has created doesn’t push the boundaries set by the original but The Darkness 2 more than manages to live up the standard set by that cult classic.