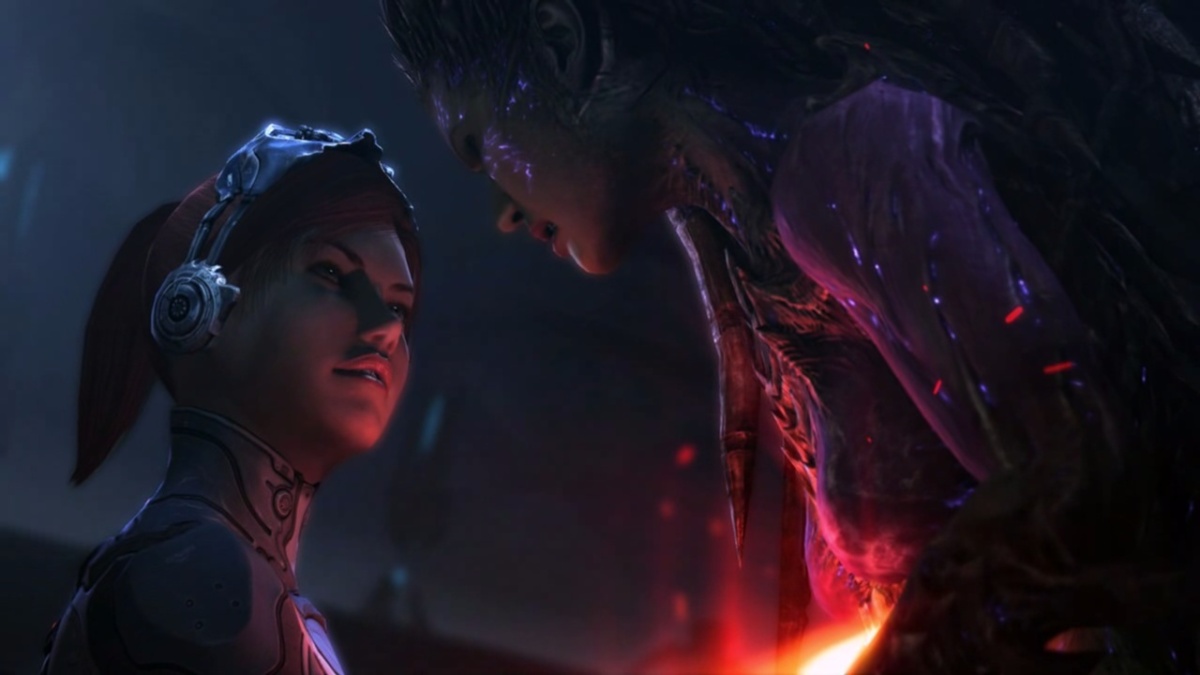 Note- This text refers to the Campaign only.

As the Queen of Blades defiantly stands over a besieged Terran city watching her Zerg swarm breach its defenses and tear humanity to shreds, you remember again that the woman once known as Sarah Kerrigan’s thirst for revenge has killed the last bit of it in herself. But for all the great and terrible power she once wielded, Sarah has been confined to a sterile white-walled lab, a woman once more. Fitting of the ravenous brood at its core, StarCraft II: Heart of the Swarm’s campaign evolves Wings of Liberty’s versatile DNA into a powerful new beast.

Continuing from where WoL stopped, HoTS smartly contextualizes the Zerg’s mechanics into the story. What starts as a test to gauge Kerrigan’s power turns into a lesson on hubris for the ones trying to cage it, starting with simple base building and introducing the basic idiosyncrasies of the insectoid faction. Things soon get more complicated as Dominion forces attack and Kerrigan is thrown back down a path of rage and vengeance.

Every mission from then on showcases StarCraft II’s brilliant design and varied progression. Doubling as tutorials for specific units, each level features a creative spin on the mechanics including wave based survival, the hostile takeover of a massive cruiser and as battles against a series of boss-level enemies. Many of the missions tackle the concepts found in Wings campaign from a different angle, keeping them from feeling redundant. Notice how Hearts ‘Infested’ level takes the attack/defend dynamic of Wings ‘Outbreak’ mission with you as virus rather than cure. They’re all fun and interesting and teach you what you need to know about controlling the Zerg Army.

Taking control of Kerrigan directly reveals HoTS greatest departure from its predecessor. By integrating the hero unit concept from WarCraft III that maps unique abilities to her as a unit, Blizzard was able to surface StarCraft’s more active micromanagement components to a broader range of players. From the ranged AOE attacks to the quick dashes, there’s just something incredibly satisfying about controlling a massive force and then popping attacks to decimate your foes. Kerrigan feels as strong as she’s always looked, justifying her place atop the Zerg throne and diversifying the gameplay.

That gameplay has been built around many of the same RPG-lite progression systems from Wings of Liberty. While some of the more permanent upgrades still force you to choose between two evolutions, the bulk of them can be set and reset to provide the freedom to experiment with new options and strategies. This is especially true of Kerrigan whose success at bonus mission objectives increase her levels, empowering her with new moves and improved stats.

If there’s a place where HoTS falls flat, it’s in the development of its story. Despite hitting the important story beats with Kerrigan’s relationship with the valiant James Raynor and her war with the wicked Arcturus Mengsk, reaching them consists of various planets smaller story arcs that are poorly expressed or seem immaterial to the plot, often reusing the same meet/gain a foothold/conquer progression.

The presentation of that story is just as awkward as all Blizzard RTS’s with the company’s beautifully directed and rendered CG cutscenes that feel a bit disingenuous to the talking heads found during missions and the many conversations that happen aboard your ship with barely animating characters who have been standing in the same spot for twenty hours.

In its place as the middle chapter of the StarCraft II Trilogy, Heart of the Swarm had less to prove than Wings of Liberty did, so it’s interesting to see how well integrated into the whole it is both narratively and mechanically. As an entry that manages to close a crucial arch to a grander story and change the state of the universe, Kerrigan’s quest pushes the StarCraft story forward and readies us for the black coldness of the void.