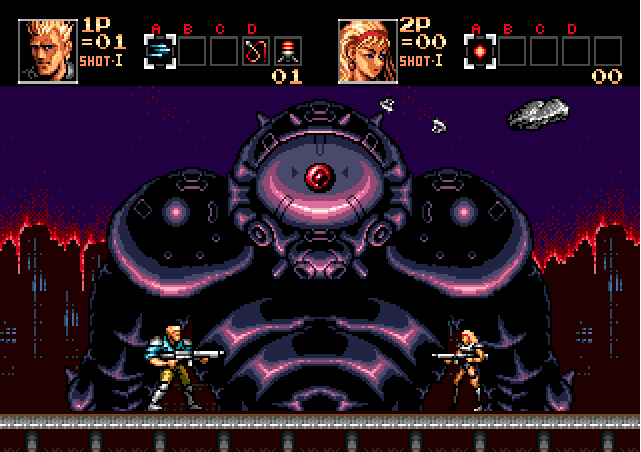 Contra: Hard Corps opens to a robotic army assaulting a sprawling future city only to be decimated by a charging tank that ejects your character guns blazing into an active warzone. Not only does this succinctly indicate where the games tonal priorities are, it’s also the designers giving you some honest advice: charge forward until every enemy is demolished. Hard Corps distilled Alien War’s brazen creativity down to its run and gun foundation, creating a single minded epic that is equal parts twitch shooter and blockbuster action flick.

For three games over as many years, Konami gave Nobuya Nakazato freedom to test the limits of 16-bit high action, using their classic arcade franchise as a blueprint. 1992’s Contra III used the SNES’ processor to create an explosive game with dazzling non-stop visuals, switchable weapons, and intense action, framing the originals Rambo premise with a cyberpunk aesthetic that looks like The Terminator was assimilated by John Carpenter’s Thing. In contrast is the animated film-esque Rocket Knight Adventures, whose essentialist design freed him from the legacy of top-down sequences and forced him to be as creative within the pure side-scrolling template as possible. The result was a clever action platformer that experimented with the well-worn genre’s conventions. After Rocket Knight, Nakazato returned to Contra, wielding the same arsenal of tricks plus a bullet belt of imaginative action set pieces.

Mechanically speaking, Contra may very well have the most versatile and responsive shooter designs of the early arcades and NES. Mega Man doesn’t have its shooting angles. Metroid doesn’t have its tight animation or stances. Bionic Commando doesn’t have its mobility. Contra effortlessly gives the player enough control to respond quickly to new threats with a clean firing line and then throws waves of enemies from throughout the large playfield. 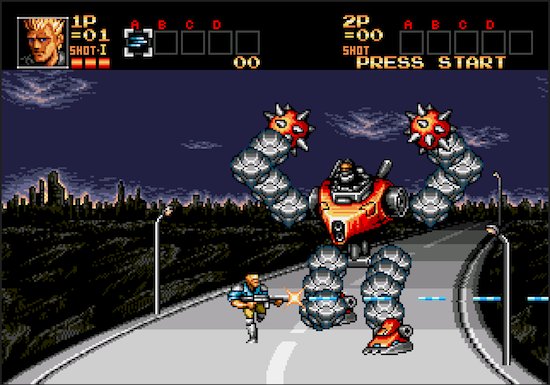 The added buttons on the SNES pad opened up new possibilities for the gunplay and Nakazato used them to extend the games tactical options. While the benefits to weapon swapping are fairly obvious, adding the ability to lock in your feet to shoot is essential, solving the problem of only being able to hit diagonals while running. Hard Corps deals with the downgrade to the Genesis’ standard three button controller by having A pull double duty, grounding the aiming when hit in conjunction to B’s firing and cycling between weapons when hit by itself. These work arounds weren’t completely uncommon on Sega’s console, going so far to have the start button toggle between punches and kicks in its Street Fighter 2 ports.

After five games, the series had been refined, going so far as to introduce multiple characters with unique weapons. And while the differences between HC’s four characters certainly change the dynamic, it’s the way the game’s pacing has been retooled that sets it apart from other releases. Within seconds of being rocketed out of the tank, you’re unloading your machine gun against a mechanized army and snagging your first two weapon upgrades. At the end of the first gauntlet, a flame-throwing crawler blasts through a building and attacks. After taking the robot out, the building topples so you can take to the rooftops and witness a massive cyclops destroy the distant skyline before jumping to you. The first stage ends with the lead robot’s defeat and the escape of its pilot Deadeye Joe.

From a certain perspective, it could be argued that Hard Corps’ shakeup was a reaction. It can’t be a simple coincidence that the series’ first Genesis entry happened to appear the year after Treasure, made up largely of  Alien Wars’ vets, released their own acclaimed run and gun debut Gunstar Heroes for Sega. The general similarities in the two games structures are striking, not only with the evasive slide but with how the end of the opening level presents the player with a branching path.

Despite Gunstar giving you control over the order some of its levels were tackled in, every single one still had to be completed by the credits. Hard Corps takes a more ambitious approach, adding substantive changes to the narrative while offering unique situations logical to their place in it. Consider the first decision: protect the research center or chase Deadeye Joe. As each is a different variation on the race scene they build drastically different scenarios, one the mad dash to the research facility while defending yourself from a squad of enemy fighters and the other actively cutting a path through the forces protecting your target. 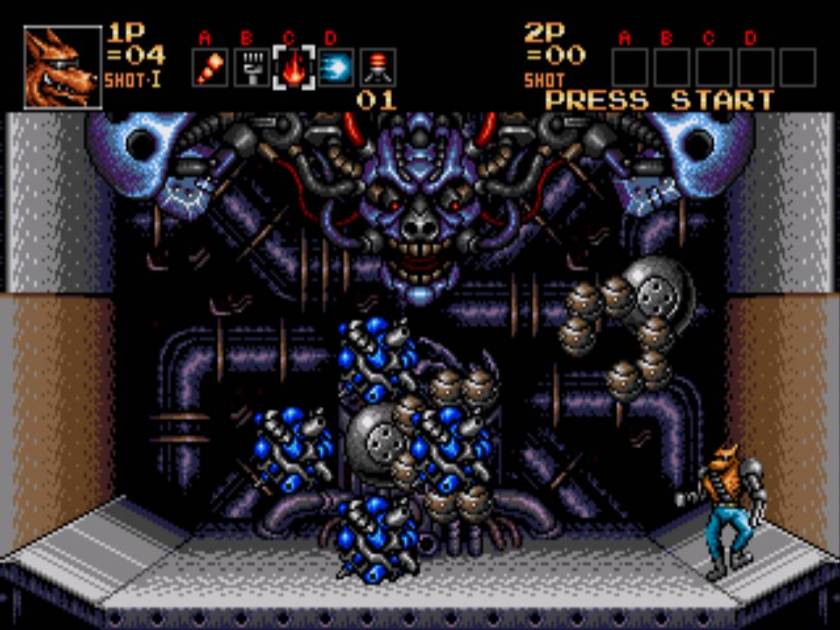 If the first level didn’t accurately exhibit how dividing Hard Corps’ levels into small chunks of time let it accelerate its pacing, the second ones certainly do. While both start along the same stretch of freeway, the run to the facility takes to the sky as an Air Police shuttle swoops down and offers a ride on its railing. After taking down missile pods and gaining altitude, you’re assaulted first by a grappler whose attached himself to the side of the chopper then by a laser shooting jet pack after you’ve climbed to it’s wings. A forced landing following a mid-air dogfight puts you at the centers outer wall and the missions second half.

A key element for creating interesting scenarios within the limited side-scrolling framework is utilizing the many graphical layers in the background. In most games, layers are used to simulate relative movement between locations, parallax scrolling techniques sliding the parts meant to appear farther from the camera more slowly than the ones nearer to it. Hard Corps uses this depth to impact the gameplay rather than relegating it strictly to the games aesthetics.

The climactic battle against Deadeye Joe flips the dynamic of the chase and puts the assassin on your tail as you tear ass down a winding freeway, his large mech jumping between the foreground and background, throwing bombs and swinging his mace-like fists. For the latter attack, the transitions between layers are communicated by modulating the musical arrangement to simulate the Doppler Effect, showing us that the scenes score and action are precisely synced together. The game is essentially playing a film and letting you control the actor on the reel. 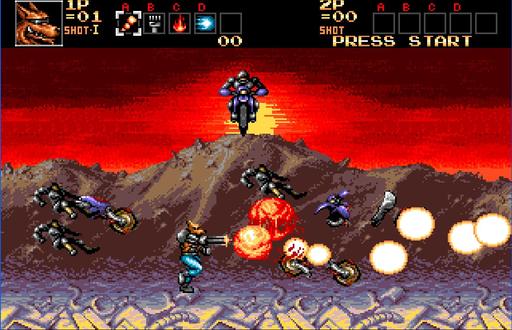 Contra’s cinematic ambitions would have failed if the music couldn’t punch its weight, but Hard Corps’ small team of musicians proved to be significant talents, several of whom would go on to make major contributions to other beloved Konami franchises. Not only would Michiru Yamane contribute the same melodic verve to Symphony of the Night and the Castlevania entries that followed, it was one of Akira Yamaoka’s earliest efforts, eventually leading him to not only compose most of the music for Silent Hill but produce many of its sequels. As you can expect from these artists, the soundtrack is a spirited mix of synth compositions that pair incredibly well with the sequences they appear in game, and hint at what both could accomplish with CD’s on the PlayStation and their extra storage space for genuine instrumentation.

While the experience working on Rocket Knight gave Nakazato’s team the skill to cast some dark programming juju on the Genesis, this too benefits from the smaller, more focused beats Hard Corps works within. The game is able to process so many elements vertically because it regularly puts them all to work on one thing, whether it’s a complex boss in a simple location or a giant pack of animals with identical models. The result is a silky smooth game filled with spectacle, a requisite for any action genre in games or movies.

The irony of Hard Corps cinematic qualities is that they also directly create its biggest hurdle. When they’re at their best, challenging games create a strong sense of player pride, the credits the reward for their hard work to overcome the odds. But HC’s heavily scripted action and limited continues don’t leave much room for improvisation and so prioritizes memorization over reaction. Here progression comes in inches rather than feet, a stack of Game Overs the byproduct to the process of working out an efficient route. Rather than relying on the player’s observational and motor skills – which can then be applied to real life or brought from it – it’s a test of patience that makes them question how many times they can see the same scenes before putting the controller down. It’s almost a movie that doesn’t want you to see it. To that end, Hard Corps’ branching paths and multiple endings become the games saving grace, adding some much needed variety even in the fortieth new game.

Nobuya Nakazato’s Contra’s set the series on a new path, the two 16 bit iterations maintaining a tone that was both stylish and grounded. After stepping away from the series to help design Symphony of the Night, he returned with the same creativity and energy for the PS2’s Shattered Soldier before expanding Alien Wars’ top down stages into Neo Contra, perhaps adding more ridiculous cheese to the series than it was prepared for. Contra: Hard Corps is an unrelenting action epic that completely lives up to its cinematic aspirations. 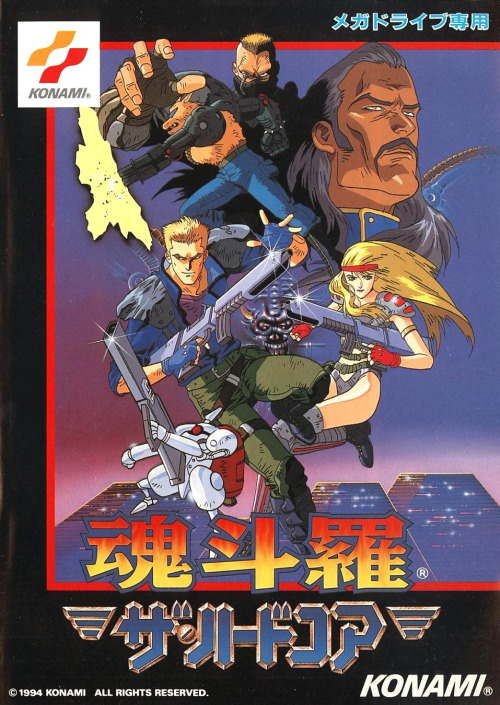