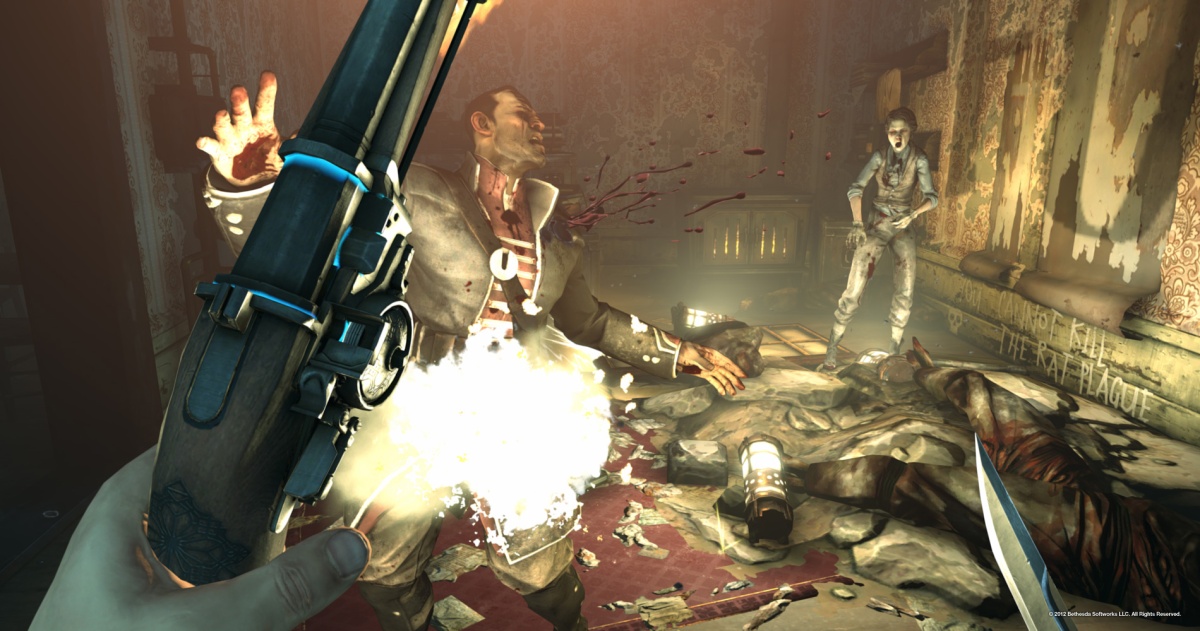 When I try to make a concrete decision as to what my favorite game of all time is, the answer tends to change from day to day. More often than not, however, Bioshock is the first thing that comes to mind. My initial arrival in Rapture was a swift kick to the face, forever opening my eyes to how it feels to be in an atmosphere so thick I could taste it. Not since that precious moment so many years ago had I experienced a world so fully realized and enticing as presented in victorian Dunwall.

Arkane developed, Bethesda published Dishonored is a game that knows just what it wants to be. The game begins with a short taste of whats to come. You step into the shoes of silent protagonist Corvo Atano, legendary bodyguard/close friend of Empress Kaldwin, as you return from a failed trip to the lands surrounding Dunwall where your task was to return with aid in the fight against the plague destroying your city. Before you’re granted a moments rest, your intimate reunion with the Empress is interrupted by two supernatural assassins warp in and murder the Empress and abduct her daughter Emily, leaving you with the blame.

What follows is your standard revenge plot. Many months later, one day before your planned execution, you are broken free from prison by a group of loyalists that seek only to see Princess Emily rescued from her captors and placed back on the throne. Of course, after you shove a knife through the face of the people who did this. And, oh man, the abilities that you possess make doing so all the more fun. The most important being your warp ability ‘Blink’. A few titles, such as Assassins Creed and Mark of the Ninja, have successfully done stealth action, but throughout history the genre has suffered from clunky mechanics causing it to, more often than not, fall flat (especially in first person games).

Last year’s Deus Ex: Human Revolution is a perfect example; a game in an enjoyable world promoting stealth/mercy but not providing you with the ability to do so fluidly. Dishonored sidesteps such issues by allowing you to avoid missed jumps or getting caught on the games geometry by giving you Blink. Need to sneak up a building? Blink in. Oops, didn’t see that guard waiting on the other side of it? Blink out. Blinking allows you to go just where you want without having to deal with potential developer error.

Like most games in 2012, Dishonored gives you options (even though it is linear). Whether you prefer to silently warp around each area systematically taking out your enemies unnoticed, or to charge in guns blazing, the game provides you with effective abilities to accomplish your task. Loose plagued rats on your foes, or possess one of them to silently travel through vents. Use ‘Bend Time’ to sneak behind some guards backs unnoticed, or to massacre them all before the first one’s hit the floor. Stick to silently introducing your blade and crossbow to dude’s faces, unholster your pistol and grenade. The bottom line is there are obstacles between you and your target, and either way you go about dealing with them is a sheer thrill.

Even though the game’s story beats are done well enough, its the fully realized world they take place in that makes the experience truly unique. Warping along the rooftops of Victorian architecture would be fun enough on it’s own, but Dishonored does one better with it’s great steam-punk motif. This, combined with the Darkness style demonic underworld that makes up the games sup-plot, casts the player smack in the middle of a tug-o-war allowing the world to occasionally throw you for a loop. Once you think you know the game, they throw you into a masquerade party, or hundreds of feet in the air traversing a city-sized bridge.

Dishonored also packs a voice-acting punch played by a solid lineup of Hollywood names such as Carrie Fisher, Brad Douriff and Mad Men’s John Slattery. While I really love Douriff’s character Piero, Susan Sarandon as the former knockout turned elderly nutjob Granny Rags takes the cake, even if she only occasionally pops in to drench some scenes in her particular sheen of insanity. Accomplished actors showing up as voices usually sucks me out of a game’s world, but Dishonored casts them in such unusual roles that it was easy to get lost in the dialogue.

With that said, to say Dishonored is without fault would be naive. Aside from the actors success in lending their voices, the characters themselves don’t have much depth to them. While they are all fairly enjoyable, you don’t find yourself caring for them very much, even by the end.Also, while playing the action-hero throughout each mission can be a lot of fun, doing so does shave off a majority of the game’s completion time, and that is just a drag for people who don’t find anything exciting about playing stealth.

While Arkane Studio’s involvement comes as no surprise (as they had a hand in Bioshock 2) it’s Bethesda’s involvement that is a little more of a curveball. While the games they have developed over the past half decade have been of a consistent quality, the games they’ve chosen to publish haven’t been of the same caliber. Following up last year’s Rage with Dishonored (and hopefully Prey 2 in the near future) proves they’re making a conscious effort to crack down on what they support.

By creating a haunting-yet-inspiring world and giving the players tools to navigate themselves around it, Dishonored is a truly enjoyable play. And while it  never claims to reinvent any of the genres it exists in, its the way in which it executes in every area that places it in it’s own class.

I put words together in ways that kind of make sense. I like good video games, boring music and awful movies. View all posts by Dylan Thomsen Esquire