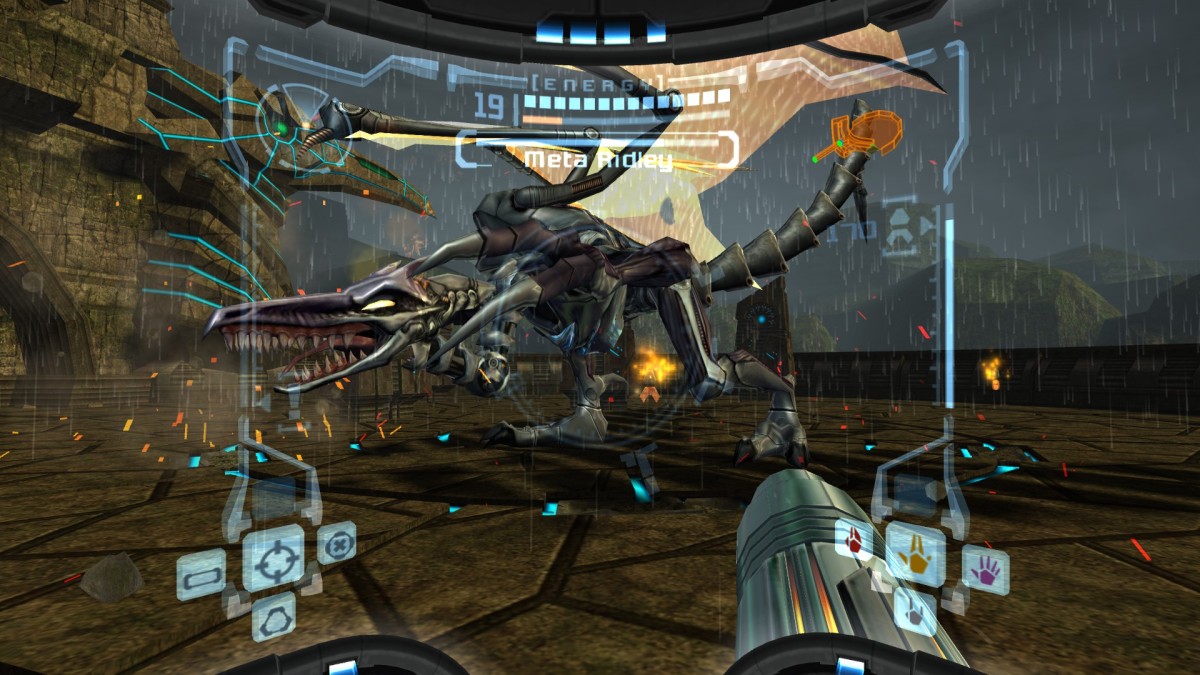 It’s said that the eyes are the window to the soul, an idiom Metroid Prime explores from a different angle. If Super Metroid’s greatest achievement was creating a cohesive world, where the majority of the game was told organically through the events on screen rather than by traditional cinematic techniques, moving that series into three dimensions needed more than translation, it needed reinterpretation. The most honest move would be to maintain the naturalness of perspective, the harmony of self and environment, and Retro Studios made the wisest, boldest move available to them, designing a first person shooter to capture the spirit of that classic and letting players strap themselves directly into Samus Aran’s suit. The first time an energy beam glances off our intrepid bounty hunters helmet and the flash reflects her eyes off the inside of her visor, it becomes apparent that the old adage holds true.

Exploration is the search for truth, a personal investigation of the world. But those two separate entities- the person and the environment- need to harmonize into one reality, must feel real independently while existing simultaneously. It requires a sense of immersion. A truly believable world means the unification of every element so that the player can connect to it, so it’s little wonder that immersion is one of the most difficult aesthetic feats. Not only does a game need to get the base structure right, it needs to nail the crucial details to create a sense of presence.

The generational leap between 2 and 3D left many classic game series in the past, and the ones that landed had to be revamped on a case-by-case basis. Just as The Legend of Zelda: Ocarina of Time was fundamentally a 3D version of A Link to the Past, Prime is built on the same structure of its SNES predecessor. Not only does it proceed down the same item-based progression, it starts on a derelict space station acting as a tutorial for the game’s mechanics. It’s hard to say whether the developers were playing safe by so staunchly adhering to fan-favorite games, but maybe they wanted to ease players into the new gameplay by giving them something familiar. An appearance by the elite Space Pirate Ridley and the activation of the ships self-destruct timer close out the sequence and lead to Samus landing on the planet Tallon-IV below.

Since side-scrolling shooters are all about simple firing angles and timing, a first-person Metroid would be more compatible than a third person one, especially in a time before a fully controllable three hundred and sixty degree camera and center-screen aiming reticle became the industry standard. By seeing from Samus’ eyes they became an extension of the player’s, her suit now their tool with the HUD elements appearing organically on the screen to feed both of you a constant steam of tactical data. But that is merely a reapplication of old design elements. Retro Studios uses Samus’ newfound perspective to masterfully elevate Metroid’s core concepts.

The act of exploration necessarily means that not only must the individual have the ability to traverse the world, but come equipped with the ability to read the information within it. The suit’s new scanning functionality taps into unseen layers of information hidden throughout the environment, revealing everything from the morphology of indigenous wildlife to the mineral composition of architecture to encrypted transmissions intercepted from the Space Pirate horde. It fills the space with data that makes it seem like a real, lived-in setting with history and culture. Through its glass, Tallon-IV reveals itself to have a vibrant ecosystem and a wide range of settings that have industrial and scientific value. Even the Chozo ruin’s near Samus’ landing site portrays the race as deeply spiritual. Other visors show just how many systems there are baked into the game, exposing the thermal and skeletal structures of the environment, all while utilizing the same core FPS machinery. That info fleshes out a story that was being silently narrated through the environmental design.

Perhaps Prime’s most remarkable victory is how it finally made precise first-person platforming viable. This was largely accomplished by its great physics and animation systems that give a weighty, solid feel to the movement and an almost perfect down force on the jumps. Much more subtle is the way that Samus’ view sways down to look at the ground if you hold the jump button in the air, a clever trick that knows human nature enough to understand that people suck in a breath when they do something daring. The physics affects the iconic morphball as well, for the first time applying real movement thanks to the momentum.

But these elements define Samus and Tallon separately, they don’t fuse them together in our minds. Because the player is a human accustomed to the universal rules of cause and effect, it responds better to games that simulate it; conversely, the more our avatar reacts to stimulus the way we would, the more our mind thinks we are psychologically linked. With every instance of Samus’ visor fogging up, every time she raises her hand to shield herself from an attack, the game’s world is acting consistently with your own. The most functional of these touches also communicates a change: when the player holds the right shoulder button to enter aiming mode, Samus’ yellow hand reaches over to steady it.

Since Prime is built out of polygons, Tallon-IV has the capacity to be a geometrically varied labyrinth of uniquely designed interconnected structures, an opportunity it skillfully takes advantage of. These locations offer their own gameplay while having a real world purpose, including the blast furnaces and power stations of Magmoor and the residences and research facilities of the Phendrana Drifts. Massive structures and working machinery characterize the location with technology and civilization and the bulk of the puzzles are built into it. These custom built places are littered with obstacles that create a pace that takes advantage of the player’s moveset.

There are a number of factors that undoubtedly influenced Prime’s single thumbstick controller configuration. Even if it hadn’t been in development long before Halo’s dual-stick design ushered in a new era of console games, only certain types of guns feel good to shoot when mapped to the shoulder buttons. The fact of the matter is, an index finger can’t pull a trigger as fast as a thumb can tap a face button so the weapons need to either fire the single concussive shot of a pistol or shotgun, or be capable of a machinegun-like burst. Samus’ arm cannon has neither, instead shooting energy as quickly as the button can be hit. Moreover, the Gamecube controller isn’t up to the task of creating fluid, precise movement as the octagonal gate around the stick draws it in very specific directions. In addition to the aiming mode on the right trigger, a familiar z-targeting system was fastened to the left- the end product being two buttons to compensate for one stick.

Regardless of the reasons for the controller layout, Retro utilizes every part to make equipment switching seamless. With the C-stick freed up, the full complement of alt cannons was mapped to it, each with their own color coded transformation; the four visor variants were similarly tied to the D-pad. With the setup, the player can get from the beginning of the game to the end without ever pausing or letting the game make choices for them with a context sensitive button. The entire game language exists at the player’s fingertips in real time.

All these choices create a fast, visceral gameplay that benefits the environment traversal and the combat. The tight controls means that Samus can react quickly in a pinch while the targeting’s relative movement allow her to make mobile maneuvers in the air to pursue a target or evade its attacks. The combat turns into a tactical game of eliminating foes while keeping in mind the other attackers, especially when they’re off screen. When it comes to active engagements, the player’s ability to recognize and move within the environment is key to their survival.

So beneficial is the suit to the design of the game that it smartly improves on the lock-and-key progression. With Tallon’s increased complexity came new challenges in routing the player between upgrades. If the player runs into an impassable obstruction, the suit will expand its search capabilities and detect anomalies, pointing you in a general direction. Yeah it’s explicit, but at least it works with its own internal logic. In that same vein, manual scanning reveals the geological composition of an obstacle and hints at what weapon is capable at destroying it, a much more organic solution than having a weapon icon appear arbitrarily in the world as it did on Zebes.

All this isn’t to say that the execution is perfect. If anything, like Super Metroid, its incredible adherence to consistency makes the ways it breaks that much more obvious. At its most blatant are the small cinematics that frame the camera on information that it wants the player to see. It’s understandable that the game relies on the technique to some extent, considering that the alternative is to convey it through the level design instead- revealing an enemy’s presence through a shadow or showing the door you unlocked on a computer terminal to name a few- but the work would have gone that much further to reinforce the cohesive sense of place. After that, the games pacing is affected by the constant backtracking through the same areas, breaking as early as the Gravity Suit, culminating in the late-game relic hunt that pads out the experience too much right before the climax.

The windows idiom always implied something that we know is true- the eyes express the emotional capability, the very nature, of a person. Despite its shortcomings, Metroid Prime is a shining example of a three-dimensional interpretation of a two-dimensional series, deftly grafting the spirit of Super Metroid into a new form. If the eyes reveal the content of a person’s character, their beauty depends on the person looking through them. 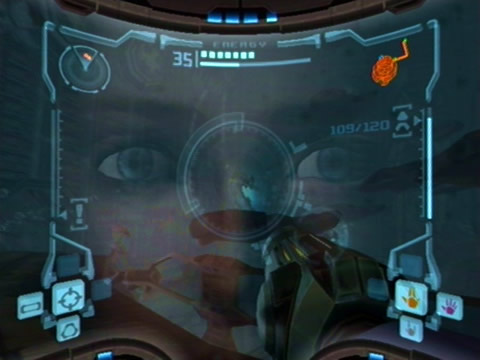